Taking on 2013 and hoping to revitalize my life

What a great holiday this has been. (I’m not counting the blow-outs with my teen as those are temporary and eventually we will outgrow them… hopefully before I run away from home.) But the rest of the holiday has been grand. 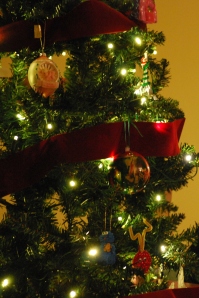 The few days leading up to Christmas were a rush of last-minute organizing, shopping, crafting and wrapping but it was all worth it. We even had some family photos done on the 23rd and although I expected none of them to turn out we actually ended up with a couple of really nice ones.

Christmas eve included chilli for 4 (with my kids and ex) and then off to an inter-denominational church service. By the time we got home there was time to open one Christmas present each, track Santa’s progress and get jammies on before hopping into bed and dreaming of sugar plums (OK, probably not sugar plums, more like Monster High dolls and a new cell phone).

Christmas morning began at a leisurely 6:50am with my ex knocking on the door. The kids were already awake but waiting patiently in their rooms for their father to arrive. Then began the flurry of unwrapping, laughter, happy children, games, turkey and movies. All in all, everyone had a fantastic day and I didn’t even mind having my ex in my house for 10 hours.

On Boxing Day we packed up the car and headed out to visit family for a few days. My sister always hosts the whole crew and it started out with 10 people then up to 13 who needed beds for the night. There are always loads of games, food and drinks to go with the newly added abundance of teenage hormones and attitudes. In spite of the latter, a good time was had by all and it ended much too quickly as per usual.

We got home last night to a lot more snow in the yard, luckily I had my ex call a plow so the only shovelling was the deck and walkway. Once inside, I rushed like a madwoman to get ready for my date with Sven. Dinner was a little later than expected but we had a nice time.

We had planned to see each other before Christmas but those plans got cancelled so I took his present to him last night. My kids thought it was a lame gift but he had mentioned wanting a cast iron frying pan so that was what I bought him. At least I knew he would like it.

I actually bought it expecting that I wouldn’t get anything in return. I just didn’t think that Sven would think to get me anything. I was wrong. He bought me a lovely pair of earrings with a matching pendant. I was so surprised at his thoughtful gift. Did I mention I didn’t expect him to get me anything? We didn’t discuss exchanging presents, I got him the frying pan because I wanted to. I guess he got me earrings because he wanted to. For all of the complaining that I do about Sven, this is definitely a +1 for him. We even have plans to get together this weekend even though he doesn’t like to make plans. Hopefully no one will have to cancel.

And tonight is New Year’s Eve. I thought I would be spending it by myself  but a dear friend of mine has invited me over. I’m not sure who I will know there but I have accepted the lovely invite as one of my final ways to put myself out there in 2013.

I have one child who still believes in Santa. And once she no longer believes, Christmas will be a little different. Slightly less magical.

But this year is not that year. This year I have written her a letter from Santa regarding some Littlest Pet Shop toys that I got second-hand. These toys are obviously not new but still have many years of life left in them. Someone was practically giving them away so I had to take them. However, I knew that I couldn’t wrap them up like the other gifts so I decided to do something a little fun.

I hope this letter helps to create a special memory this year. Christmas is about creating magic and my heart wishes for excited laughter and smiles, which sounds magical to me.

I’ve decided to keep my challenge for November relatively easy. Being back at work has cut into my free time in a big way so my plan is to use the KISS method this month – Keep It Simple Stupid.

This month’s challenge is to eat more fruits and veggies again.

I haven’t been consistent with my fruit and veggie consumption these days so it’s time to get back to eating better. My plan is to have a minimum of 3 smoothies a week. I also want to combine this with exercising 3 days a week. November is a great time to look after yourself especially with the excess of Christmas right around the corner.

One other thing I want to do this month is to catch up on the things that I have fallen behind on in my writing course. I’ve missed out on some of the reading and I haven’t watched some of the videos so I need to try my best to get up-to-date on what is happening with my writing peeps.

That’s it, keeping it as simple as I can. Feel free to join me on the quest to eat better and exercise, November seems like the perfect time of year for that :).